TIM-1000 – The New Standard for Huddle Rooms and Conference Spaces 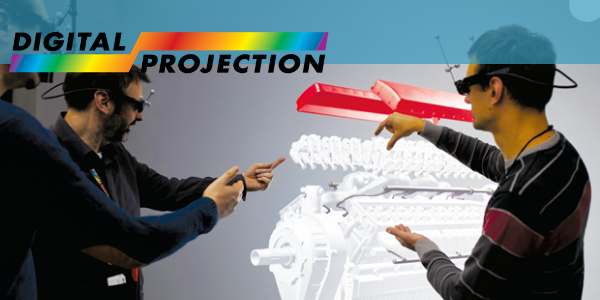 Prior to the launch of Digital Projection’s newest product, 3D technology suffered from a significant immersive limitation: each user was seeing exactly the same image, regardless of where they were positioned. Digital Projection has again moved ahead of its competitors with the INSIGHT 4K HFR 360 Multi-View 3D projector, which can finally offer truly immersive, collaborative and interactive 3D experiences.

The Insight 4K HFR 360 is capable of rendering three independent native 4K-3D viewing perspectives, with the addition of a second unit able to increase the amount of VR viewers to six.

The projector can be matched with headtracking technology, allowing users to see content from a unique perspective, remaining appropriate to the user’s changing position for collaborative content sharing.

This system has the ability to track each user down to six degrees of freedom, utilizing active 3D glasses that can switch between black and transmissive states in approximately 200ups.

Previously, the ultra-fast frame rates required for a multi-viewer 3D system have meant sacrificing resolution – and therefore image fidelity. Digital Projection was not willing to accept such a compromise. The new INSIGHT 4K HFR 360 offers both native 4K and high frame rate – thanks to the thousands of hours invested by Digital Projection’s team of experts and their unsurpassed experience in 3-chip DLP projection.

Instead of providing 120 frames per second, which is enough for single user 3D, the INSIGHT 4K HFR 360 delivers an unrivalled 360 frames per second at native 4K resolution, enabling content creators to serve three independent, high-resolution 3D views with just one projector. Furthermore, the addition of a second projector to the system increases the unique user 3D views to six.